Jonathan George Wegley was born on September 3, 1836, in Somerset Pennsylvania. He died on March 1, 1892, in Lockington, Shelby County, Ohio. We know this date of death from his gravestone. 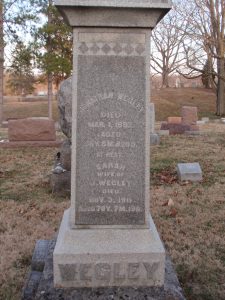 Jonathan George Wegley married Sarah Circle in Mercer County, Ohio on November 21, 1857, when he was 21 years old. Together they had at least 11 children. 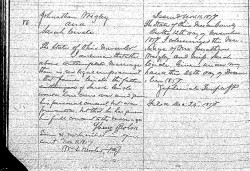 Here is the death certificate for his son Fredrick Wegley. This shows us that we have the right family – Jonathan Wegley and Sarah Circle. 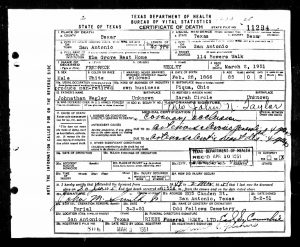 Jonathan George would have one son (Joseph) that would go on to be mayor of Williston, North Dakota and another son who ran a local watering hole or gathering place. Only problem was that it seems the area was “dry” and he was caught or at least accused of selling liquor. He would later be acquitted. Here is the text from the local paper at the time about the incident.