Ralph Richardson was originally thought to be the son of Bedo ap Richard, who was from Wales, making him the grandson of Richard ap Hywel. That turns out not to be true.

Ralph Richardson, is presumed to have been an officer in the army of Richard III, and he came to Jersey after the King was killed at the Battle of Bosworth in 1485.

He must have had previous connections to Jersey because he became a tenant of the Seigneur of Rosel and is believed to have farmed 70 vergées in St Martin. There is some dispute about the timings because family tradition has it that he arrived immediately after the battle, the last significant engagement of the English Civil War, and took up farming then.

Going back to the Island Wiki data, it says ….

However, 19th century historian J Bertrand Payne, in his Armorial of Jersey says that Ralph took up farming in St Martin in 1507, four years after the birth of his son Thomas in England and the death of his wife.

Ralph married Jane Mychiel, daughter of John, in Jersey, but their son Thomas was born in England. He had a son, also Thomas, who stayed in England and his lineage is traced in one of the trees below. Another of Ralph’s children, Edmund, was born in Jersey, and other sons of Thomas also established families in the island. One branch moved to Guernsey, where their surname was corrupted to Reserson. The two island families were united by the marriage of Clement Richardson and Jacquine Reserson in the 18th century.

This was very much a St Martin family and the first baptism was recorded there in 1599. Although the family largely remained in the parish, it did spread into neighbouring Grouville, Trinity and St Saviour, and ultimately throughout the island, most notably in St Ouen.

What we learned is that Ralph Richardson is not only not related to Bedo ap Richard but also is not be the father of Thomas Richardson I of Westmill.

His son’s family tree is as follows ….

1 Thomas Richardson m (1605, Gr) Jeanne Giffard, d of Richard )Thomas is possibly the son of Jean and Marie Averty, of Grouville, or Thomas and Anne Le Ray, of St Martin)

If I were to believe the hundreds of family trees on Ancestry.com and other similar sites, I would be here telling you today that Bedo Ap Richard was the father of the very first “Richardson”. His name means Bedo son of Richard ap Hywel and that he was He was born in 1430 in Glamorgan, Wales. He died in 1470.

Hundreds and hundreds of family trees have this information wrong.  Why? Because they all just accepted that the information was true because someone else said it was.

So then who is Bedo ap Richard? He was born in Mathraval. I googled that and it turns out Mathraval (also known as Mathrafal) is a castle. It was the original capital of the Princes of Powys, one of the three royal seats in Wales. The castle was destroyed in 1212. That means he couldn’t have been born in 1430, two hundred years after his birthplace was destroyed. So that tells us Bedo ap Richard was born some time before 1212.

Now I found a document that tells us who his family is. His father was in fact Richard ap Hywel. Just not the one from Glamorgan. This document comes from page 416 of the book “The Montgomeryshire Collections, Volume 8”. 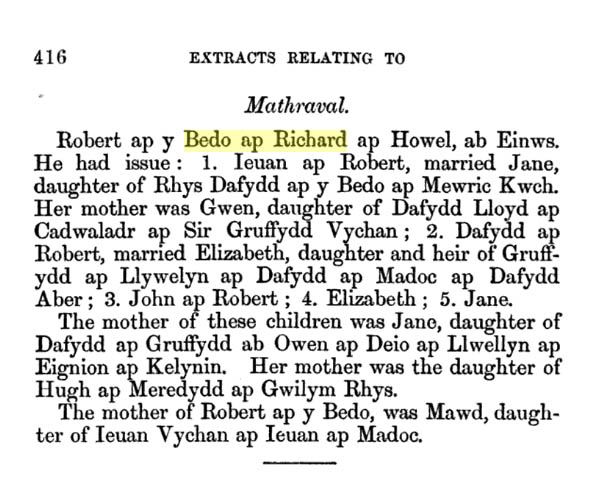 So from this document, we can say for sure that the line here starts with Hywel ap Einws. This would be Bedo ap Richard’s grandfather. (Remember ap = son of).

At the very bottom of this document, we see that Bedo ap Richard’s son Robert’s mother was Mawd Verch Ieuan Vychan.

Bedo could also be known as Blddn or Bleddyn.

Other variations of Hywel include Hywell, or Howell or Howel.

So anyone doing their family tree and want to list Ralph Richardson of the Jersey Channel Islands as having a father named Bedo ap Richard would be wrong.

Are there any other references to Bedo ap Richard in old books? Turns out there are!

In  a document called Montgomeryshire Pedigrees (page 137) it says …

Now we have two different new spellings. The first is Bedo ap Rich’d. The next is Hywel (Howell) ap Einion of Drewern.

With this new variation in his name I was about to find a Hywel ap Einion.

This led me to a new book called – “Montgomeryshire Pedigrees: Heraldic Visitations of Wales and Part of the Marches, Between the Years 1586 and 1613; Ed. with Notes by Samuel Rush Meyrick”.

This book reveals to us a new family tree of this previously mentioned Griffith. 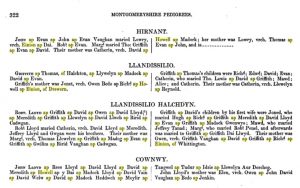 This means that his mother was Jonet verch (daughter of) Owen. Owen may be a spelling variation of Owain (just as Hywel is of Howel or Rich’d is of Richard).