What is a direct descendant?

That’s a great question and one that comes up often in terms of your family tree.  The answer is that a direct descendant is someone in your direct bloodline.  For example, a mother and father have a child and they have a child and that child has a child and then that child has a child and so on and so on.  That is the direct line of descendent.  This does not mean cousin’s, aunts, uncles etc.  Your 3rd cousin on your mother’s side is what they call a linear descendant.  Of course that means you are still related to them via blood, but they are not considered your “direct descendant”.  Like if you have a sister and she has kids.  Sure they are your nieces and nephews but they are not in your direct line.  So that means that you are a direct descendant of your 17th great grandmother but not your 3rd cousin.   I hope that clears things up. 🙂

I have a lot of members of my family that are royal, does that give me any special rights or titles?

Many many many people in the US find that when doing their family tree they are somehow related to various members of royalty but even so that probably doesn’t give you much more than just an interesting side note to your family history.

Even if you could find a title in your family that has fallen into abeyance are you sure YOU are the one who qualifies to claim it?  It mostly passes to the oldest male of the family and that could mean your family but most likely it means a branch way way back that has their own oldest living male heir.

I am the oldest living male heir in my family for real.  So can you claim a title in abeyance?

Maybe but it’s not for sure.  British Peerage law is very confusing.  You’ll need to read up on it more here or perhaps invest in a lawyer in the UK that specializes in that stuff.

The Crown, as fount of honour, may determine all petitions claiming peerages. The Sovereign upon the Attorney-General’s advice can grant the claim or, in contentious matters, send it to the House of Lords, who in turn send it to the Select Committee for Privileges. (The House of Lords appoints 16 peers – including the Chairman of Committees – to the Committee.) Next, the sovereign makes a final decision based upon the Committee for Privileges’ recommendation.

The Committee for Privileges also has a rôle in terminating abeyant peerages. A co-heir may petition the sovereign for a termination of the abeyance in his or her favour; the sovereign can choose to grant the petition, but if there is any doubt as to the petitioner’s pedigree, the claim is usually referred to the Committee for Privileges. If the claim is unopposed, the Committee will generally award the claim to the petitioner. Under a decision of 1927, however, the Committee can deny a claim if the peerage has been in abeyance for more than 100 years, or if the petitioner holds less than 1/3 of the claim (an eldest son would inherit all of his parent’s claim, while daughters divide their parent’s claim amongst them in the absence of sons).

What is the best way to get started doing my own family tree? What website should I join? Should I hire a professional genealogist?

None!! Are you crazy?  Don’t join any website just yet.  And for sure don’t hire anyone.  To start don’t spend a single penny on anyone or anything.  Start out slow and small.  See how much information you can gather from both sides of your family by doing interviews with every single one of them.  You want the full name, (first, last and middle), date of birth and date of death of everyone they can remember.  Also write down where each person was born and died (if that person in question is dead.

Think outside the box when trying to find family members. John is not the same as Jon.

To us a name like Pete is common, I mean how can you really spell that wrong? But as a friend of mine named Pete Gandolfo recently helped me realize, Pete to us isn’t the same in every country. In Italy he is Pietro Gandolfo. When doing his family tree he has to use all kinds of variations of names, including common foreign spellings. So think about where most of your family members are from. In the case of Pete Gandolfo, he’s from Italty, so he not only searches for US spellings of names, but also he does the same research on the Italian spellings.

What do you know about DNA testing in relation to your family history?

DNA testing for the purpose of building family trees and ancestral heritage is still very new.  Well not the concept of DNA testing, just the putting it together in a database for the purpose of family tree making.  While it is a great concept, it will take time for it to be truly what it could be.  For now how many people are really in their database?  While for now I hear there are thousands and thousands (and that’s great) but there are millions of people are living in the world right now?

In time I am sure this is going to be amazing as their database grows.  So my thought on it is, if you have the money and can afford to do it, great!  You should contribute and help build up the family database, genetically speaking.  But don’t expect crazy good results right now or today.  It will take time and one day, your children’s children will really be glad you participated.  But if money is tight then probably not worth the $99 to $250 people are charging for the tests.  At least that is my opinion, for whatever it is worth. 😛

If I had the money I would genetically type every single living member of my family and make sure it is included in the database.  But eh, it wouldn’t benefit me that much for now but one day, generations later I know they will have appreciated us doing that.  So really it is up to you. 🙂

You have a very long and interesting family tree.  Might I ask what got you started in the process of researching them in the first place?

My love of genealogy began in the early 1990’s.  I was living with my grandparents at the time (Alice Joann Price and Jean Noel Cash).  He was dying slowly of lung cancer and we would sit in his room for hours together, every day watching the history channel or talking.  Jean Noel Cash spent 20 years of his life in the 1970s – 80s researching his family tree long before they had the internet.  On his vacations and holidays he would go to small towns and dig through their archives to find his family members.  He spoke so passionately about the subject, I think that is sort of what initially sparked my interest.

Jean Cash was not my grandfather by blood.  I had never met my “real” grandfather.  I only barely knew his name, or what I thought was his name at the time “RN”.  Nobody ever talked about him and I never wanted to offend anyone by asking, especially my beloved grandfather Jean who had been the most wonderful grandfather ever.  I didn’t want him to think I loved him any less by wanting to know about RN.  Turns out he didn’t think that at all and when I finally revealed that I would love to do my family tree, he was more than happy to help.  He taught me all he could about the process from his bed.  I eagerly interviewed every member of my family that I could, trying to get anyone to reveal anything I could about this man RN.

They would reveal tidbits like they were poor Irish immigrants or that he came from a huge family with a lot of siblings.  My grandmother sat down one day and tried her best to recall some of their names.  Turns out he had at least 6 siblings (that she could recall and their names were Luciele, Lorene, Kitty, Joy, Dolly and Betty Jean and his name was Reuben Neiman, not RN as I had always thought and even more shocking, he was still alive!  Nobody really know where he was living but he was thought to be alive somewhere in Texas.  She gave me the mailing address of one of RN’s sisters.  I told her who I was and what I was doing and asked her if she could provide me any information about their family.

I awaiting eagerly for weeks for a response to my letter.  However I would soon find my joy dissipate as his sisters that were living decided it was best that I drop the subject.  I think (at least from what I have been told) their fear at the time was that we would try and find RN.  RN was described as a man with a gambling problem and they probably thought it best he wasn’t in our lives.

I would try again over the years, especially with the invent of the internet.  I did some work on Prodigy (a site that really sort of predated websites), and then again on sites like Genealogy.com and later at Ancestry.com a few times.  I would buy copies of programs like Family Tree Maker and piece together what I could but often with little luck.

Then one day in 2012 I was watching the show “Who Do You Think You Are?” where celebrities look into their family tree with the help of Ancestry.com.  I was bored so I decided to do the same.  I thought if nothing else I could kill a few hours adding bits and pieces to my tree.   Turns out that over the years quite a bit had changed and building my family tree became amazingly easy with the help of technology.  RN was dead and so there was a record of his death and that led me to other facts about his life and from there I just kept going and going and before I knew it I was some 20 generations back.

I read somewhere once that if you share the same last name as somebody chances are if you research back far enough you are going to be related in some way or another.  Think this is true?

This may be true with some names but not Richardson.  There are at least three distinct Richardson lines that I have learned of … one from Scotland, one from Wales (who can eventually trace their family heritage back to Roman emperors) and the other I am not really sure enough of, but some say a combination of English / Ireland.  My line is that of the Welsh.  Richardson is such a common name too.  Look at all of the Richardson family members just in 1920.  So to answer your question more specifically, while it is true you MAY be related to someone who shares the same last name, that doesn’t mean for sure you are, especially in the case of the Richardson line. 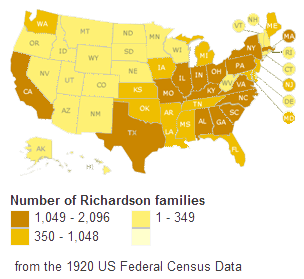 Who was the first ever Richardson?