So many people in my tree named Thomas Richardson. This particular one we are speaking about now was born in 1523 in Westmill, England and he died in 1570.

Although I should note there is a Millennium file document that says he died in March of 1630. But that could be his son.

What I can say for sure is when he was born and married.

It was originally thought that Thomas Richardson I of Westmill’s father was Ralph Richardson of the Jersey Channel Islands. That turns out however not to be true.

Many have wrongly associated this Thomas Richardson with Sir Thomas Richardson of the Scottish Peerage. That would be impossible because ancient records tell us that he married on December 14, 1626, at St. Giles-in-the-Fields, London without issue. That means he had no children so he can’t be your ancestor because his line ended with him.

So who is our Thomas Richardson? This gets confusing for a few generations so to clarify …

Thomas Richardson I of Westmill married Margaret Silverside on June 15, 1567. How do we know when our Thomas was born? Thanks to the “Heritage Consulting. Millennium File”.  This record tells us that he was born in 1523. 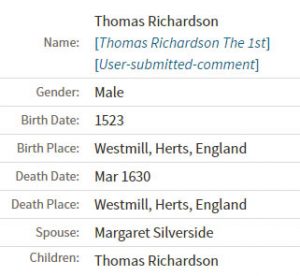 The problem is, the death date is wrong. It lists the death date of his son Thomas II. This is why it’s so hard to find accurate information when even “official” records are flawed.

Below is a copy of their marriage register which clearly shows they were married in 1567 on June 15th. 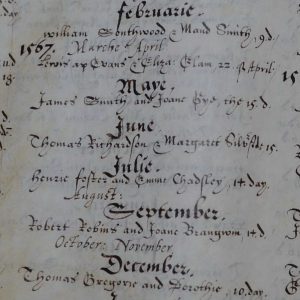 The problem with the name “Thomas Richardson” is that in this time in history there were more than a few of them in the area. This makes it very hard to figure out which one is which. That’s why when you find any sort of absolute proof of information, you have to hold onto it tightly to make sure you don’t confuse or mix up people because it’s so easy to do.

This record comes from the Hertfordshire online archives. Why it is important is because it further proves we have the right Thomas with the right wife. 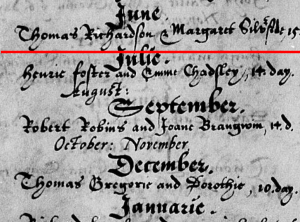 So now the question is, who is Thomas Richardson I of Westmill’s father?

4 thoughts on “Thomas Richardson I of Westmill”