What I love most about genealogy is that it’s like a mystery and you have to dig and figure out how to solve this puzzle – these puzzle pieces just so happen to be parts of my very existence.

This makes it quite complicated when you are trying to find the exact Thomas Richardson that belongs in your family tree.

The Thomas Richardson we are looking for today is the father of John Durk Richardson.

What we don’t have though is a death certificate to prove it.

Going this far back in history it isn’t always so easy to find answers with proof. I’ve been trying to piece together his life but it hasn’t always been easy.

We know that Thomas Richardson is the father of John Durk Richardson. But even that simple fact gets muddled and confused when digging that far back in history. 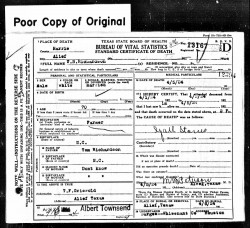 This document should serve as a reminder that if you can’t find information on your own direct relative start doing some research into their brothers and sisters.

Let’s take a look at the 1850 US census. This document tells us that in 1850 he was 24, which puts his birth year about 1826. This matches perfectly with other data we have found.

It tells us that he was born in North Carolina and that at the time he was living in Moore, North Carolina. So far it all checks out.

Listed on the US Census were

That means we now can confirm that John’s mother was Nancy and Thomas Richardsons’s wife was Nancy. Nancy who though?

During the course of their marriage Thomas and Nancy Richardson had at least four children.

This means that our Nancy (whoever she may be was in fact alive in 1850. She however died sometime before 1860.

In 1860 the census records show us that Thomas is married to someone named Margaret. Everything else matches up including Lydia, John, Isham – they are all now 10 years older than the previous one. The newest addition is WM Richardson – which with other documents we would find is William Bruford. All we know about his new wife is that she is 20 years old in 1860 and she was born in North Carolina.

But let’s go back to Nancy. For awhile I thought that the Nancy in question was Nancy Keller (several other family trees said that), whose father in Solomon Keller. But I eventually found an old clipping from a North Carolina archive about her father. In that story it says that Nancy Keller married James Jackson. So that means that John Durk’s mother Nancy isn’t Nancy Keller.

There is however a Nancy Kelley that could be our mystery Nancy. The William Richardson death certificate doesn’t list the maiden name of his mother. It states he doesn’t know her maiden name or even where she was born at.

Last but not least I went to Isham Thomas Richardson. I was hoping with such an unusual name it would be easier to find official documents on him. His find a grave listing had a photograph of his headstone which confirms his date of birth and date (April 2, 1849-February 23, 1923).  Sadly I couldn’t find a copy of his death certificate or any other official document stating Nancy’s maiden name. It could be Nancy Kelley, but then again it may not be. Until we have some sort of actual document verifying it, we can’t say for sure. All we can say for sure is that it’s not Keller nor is it Jackson. I just to note that there was in fact a Nancy Kelly who lived in Moore, NC of all places that appears in the 1860 US census. This person is not our Nancy. That Nancy Kelly is married to Salley Kelly, obviously not making that our girl.

Moving forward with Thomas Richardson, we next have a North Carolina, Marriage Records document that show Thomas married his next wife, Margaret McCaskell on May 8, 1860 in Moore, North Carolina.

This means that his wife Nancy seems to have died sometime between the birth of William in 1854 and the 1860 census.

In 1880, the US census tells us that he was 54 years old and was living in Parker, Texas at the time. His birthplace was North Carolina (which we already knew) and that both his mother and father were born in North Carolina as well. He was a farmer and his wife (2nd wife) was 41 in 1881.

At this time they had only two children living with them, King (15) and Julie (11). The King listed is Rufus King and the Julie listed is their youngest daughter Julia Frances. They also have a 11 year old child living with them named Thomas Rogers who is listed as their white, 11 year old adopted son. It says his real father was born in Tennessee and his mother was born in Texas.

What this document tells us is that both Thomas’s parents are from North Carolina. That’s one more clue in the mystery of who his parents were.

There is a John David Richardson who was born in Moore county of North Carolina in 1795 who had a son named Thomas. Is that our Thomas, father of John Durk? I just don’t know. Not yet. 🙂

We know that our Thomas had a son named Isham Thomas Richardson in 1849.

One thought on “Thomas Richardson”