What makes tracing the material family tree so complicated is the very fact that the Wegley name has so many variations. It also doesn’t help that when you go so far back in time, you don’t have as many records. But what complicates matters, even more, are when two people who have similar names happen to live in the same area.

Most sources list his birthday as September 15, 1731, and his death on September 15, 1831. That would mean that he died on his 100th birthday. The problem with that is that other documents don’t support this data.

What we can say for sure about Philip Weigley is that his gravestone which is in the Berlin Reformed cemetery aka the Weigley cemetery says he died on September 18, 1831, in the 92 years of his life. It also says “In memory of Philip Weigley, who departed this life. ”

Other records of the time state he was the “First permanent settler in Berlin Region and was formerly spelled Wegerline.” 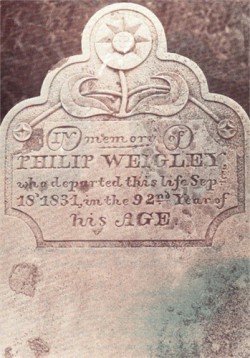 Next we have an interesting document from the website pa-roots.com.  It tells us that he was one of the earliest settlers in the Brothersvalley area of Pennsylvania. The story goes on to say that he had a small farm which he grew Rye on.

On October 5, 1784 he was issued a land grand in Bedford, Pennsylvania. There are at least two different government documents that back this up. This would have made him about 45 at the time. Google maps shows us that Bedford and Brothersvalley Township are about 40 miles apart.

Old Mr. Philip Weigley must have been among the earliest settlers, perhaps the next after Rhoads. He came to Brothersvalley, built a house, cleared five or six acres of land and sowed it in Rye. The next winter the snow was five to seven feet deep and lay without a thaw for nearly four months. Without a thaw for nearly four months be intolerable and that he would take for his land what he could get, so that he might get off as soon as possible in the spring. He had paid $50.00 for it, and he thought if he could get that much he would be a fortunate man. Soon after spring opened, three persons came along exploring the country for a place to locate themselves, and seeing his field of rye, which was a remarkable promising crop, they asked him what he would take for his place. He was afraid to put his price of $50.00 upon it lest it might frighten them, and he therefore told them to make him an offer. They offered him $150.00 and it astonished him so much that he broke the negotiation short off and told them he would not sell.

Now it is true, he could have moved from Bedford to Brothersvalley, since it’s not really that far away. But we know for a fact he lived in Bedford until 1790, which we can verify through the 1790 US Federal Census. His first listing in Brothersvalley was in 1800, which means he would have been almost 70 years old at that time.
He went his entire life until he was 70 years old using the name Philip Wagerline. Why would he suddenly change it to Philip Weigley? That part I don’t understand. And another thing …. why did he move when he was 70 years old to start up a new farm?
However to note, Brothersvalley is in Bedford county. So is it possible he didn’t in fact live in Bedford the town in the 1790 census but instead Bedford county in the yet to be named area that one would day be Brothersvalley?

This first day of October 1831 before me Chauncey Forward, Register for the probate of Wills and Granting Letters of Administration in and for said County personally came Tobias Musser and Peter Musser the subscribers witnesses to the foregoing will and being affirmed according to law did depose and say that they were present and saw and heard Philip Wagerline the Testator sign seal publish pronounce and declare the foregoing instrument of writing as and for his testament and last will and that at the time  of so doing he was of perfect and sound mind memory and understanding to the best of their knowledge observation and belief.

By the tenor of these presents, I Chauncey Forward, Register for the probate of wills and granting letters of administration in and for the County of Somerset in the Commonwealth of Pennsylvania, do make known unto all men, that on the day of the date thereof at Somerset before me, was proved, approved and insinuated the last will and testament of Philip Wagerline late of said County deceased: (a true copy whereof is to these presents annexed) having whilst he lived and at the time of his death, divers goods, chattels, rights and credits within the said Commonwealth.  By reason whereof the approbation and insinuation of the said Last Will and Testament, and the committing the Administration of all and singular the goods and chattels, rights and credits, which were of the said deceased, and also the auditing the accounts, calculations and reckonings of the said Administration and a final dismission from the same, to me are manifestly known to belong; and that the Administration of all and singular the goods and chattels, rights and credits, which were of said the deceased any way concerning his last will and Testament was Committed to Jacob Good, Executor in the said last will and testament named Jacob Good having been first affirmed according to law well and truly to Administer the goods and chattels of the said deceased; and make a true and perfect inventory thereof and exhibit the same into the Registers Office at Somerset, on or before the 1st day of November next, and to render a just and true account, calculation and reckoning of the said Administration on or before the first day of October next ensuing.  In Testimony whereof I have hereunto set my hand and the seal of the said County of Somerset, this first day of October in the year of our Lord one thousand eight hundred and thirty one.

1836 was a rough year for the Wegley family, notice that Philip lost 4 of his 6 children that year. Of course he died 5 years prior to that so he wouldn’t have actually known his children died, but that’s not really the point. 😛

What I wonder is, how did they all die that year? What possibly could have been going on at that time in history to have caused so many deaths? The only war I could find was the Second Seminole War but that took place in Florida.

His parents were most likely Paul Wegerline and Ottilia. In all he had six siblings (not 100% verified – but current research shows these might be accurate).