Samuel Richardson was born in 1602 in Westmill, Hertfordshire, England. He died on March 23, 1658, in Woburn, Middlesex, Massachusetts.

Samuel Richardson was christened at St. Mary the Virgin in Westmill on December 22, 1604.

In 1636 they arrived in Charlestown, Massachusetts. He was one of the founders and largest landowners of Woburn, Mass.

His father was Thomas Richardson of Standon and his mother was Katherine Duxford. 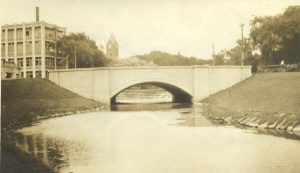 When the church was constituted in Woburn, Aug. 14, 1642, O.S., Samuel Richardson and his two brothers, with John Mousall, Edward Johnson, Edward Converse, and William Leonard, solemnly stood forth, as the nucleus around which the church was to be gathered.
The first organizational Town Meeting was held on April 13, 1644, and the first town officers were chosen. Town Selectmen were Edward Johnson, Edward Converse, John Mousall, William Learned, Ezekiel Richardson, Samuel Richardson, and James Thompson. William Learned was also selected as Constable.
Michael Bacon, Ralph Hill, Thomas Richardson were chosen for Surveyors of Highways. As you may recall, this was a position that Samuel previously held.
The three brothers lived near to each other, on the same street, which has ever since been known as “Richardson’s Row.” In 1647 the town officially named it Richardson Street which still exists to this day. 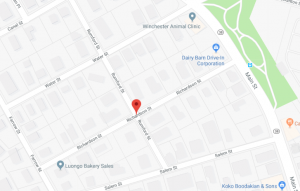 Samuel Richardson was selectman of Woburn in from 1644-1646 and from 1649-1651.
In 1645, he was listed as having paid the highest tax of any man in Woburn; Capt. Edward Johnson the next.
Samuel Richardson was married to Joanna Thake who united with the church in Charlestown on the 9th of July, (or Sept 9th), 1639.
Samuel Richardson died on March 23, 1658, without leaving a will.  His widow and eldest living son John were appointed administrators of his estate. John would have been about 19 at the time his father died.